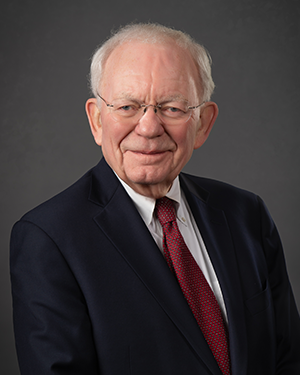 Rich has tried over 200 cases to jury verdict and handled numerous appeals during his career. He has tried numerous medical malpractice and railroad cases to verdict on behalf of the doctors, hospitals and railroad companies he represents. Rich also has a general civil defense trial practice on behalf of insurance companies and corporations. He has obtained verdicts for his clients in some of the most difficult jurisdictions in the country.  Rich is often sought out by his colleagues in the firm for his practical and realistic advice concerning cases that they are handling.  Rich handles cases in the trial and appellate courts of both Illinois and Missouri.

Rich was born and raised in nearby East St. Louis in St. Clair County, Illinois and grew up in the rough and tumble environments of St. Clair County and Madison County, Illinois. Rich worked his way through both college and law school. Away from his practice Rich enjoys spending time and travelling with his two daughters and grandchildren.  A physical fitness fanatic Rich runs many miles each week.  When not on the run, Rich is a strong fan of professional football, particularly the St. Louis Rams.

Plaintiff v. Doctor. Medical Malpractice. Jury trial. Mr. Roessler defended a doctor. Plaintiff underwent a hysterectomy and developed a post-operative infection. Plaintiff was allergic to all normal antibiotics and was treated with a very potent antibiotic, chloromycetin. She developed aplastic anemia.. Aplastic anemia was a known risk of treating with chloromycetin. Mr. Roessler and Boyle Brasher LLC successfully defended the case on the basis that the risk of death from an untreated abdominal infection outweighed the risk that plaintiff would develop aplastic anemia as a result of Boyle Brasher LLC’s client prescribing chloromycetin.

Plaintiff v. Doctor. Medical Malpractice. Jury trial. Mr. Roessler defended a pediatrician. An infant, six months of age, was treated by a pediatrician for a period of one week for a viral infection. The child developed symptoms of bacterial meningitis and was treated by another doctor. The child ended up without brain function and died at the age of 1-1/2 years. Mr. Roessler and Boyle Brasher LLC defended this case on the basis that viral infections often precede the development of meningitis and that there is nothing that the pediatrician could have done to predict that the child would develop bacterial meningitis or prevent this from occurring. This resulted in a verdict for Mr. Roessler’s client.

Plaintiff v. Medical Laboratory. Medical Malpractice. Jury trial. Plaintiff filed suit against a medical laboratory represented by Mr. Roessler and Boyle Brasher LLC and a pathologist who contracted services with Boyle Brasher LLC’s client. Plaintiff alleged that defendants misdiagnosed cancer resulting in unnecessary surgery, resulting in permanent disability. Plaintiff retained the chief of pathology of a major hospital who testified that the biopsy had been misdiagnosed as cancer. Mr. Roessler retained a pathologist from a major teaching hospital as an expert who testified that the biopsy showed cancer and the surgery was necessary. The jury returned a verdict in favor of all defendants.

Plaintiff v. Railroad. Retaliatory Discharge case. Mr. Roessler represented the defendant railroad. The defendant obtained a dismissal of the retaliatory discharge case in the trial court on the basis that it was a minor dispute and preempted by the Railway Labor Act. This case was affirmed by the Seventh Circuit Court of Appeals and certiorari was denied by the U.S. Supreme Court.

Plaintiff v. Surgeon. Medical malpractice. Mr. Roessler represented a plastic surgeon who performed an excision of a cyst resulting in a post-operative infection. Expert testimony from a nationally known plastic surgeon was presented that this was a complication which could occur no matter how carefully the surgery was performed, which resulted in a defendant’s verdict for Mr. Roessler’s client.

Plaintiff v. OB-GYN. Medical malpractice. Mr. Roessler represented an ob-gyn who had performed a third degree episiotomy during the delivery of Plaintiff’s child. This resulted in the complication of a fistula. A local ob-gyn testified on behalf of the defendant that the fistula was caused by post-operative infection due to plaintiff’s failure to follow instructions. This resulted in a defendant’s verdict.

Plaintiff v. Doctor. Medical malpractice. Plaintiff (a minor) developed pneumococcal bacterial meningitis. Suit was filed against Mr. Roessler’s client, a doctor who treated the child for a pre-existing viral infection. The child suffered profound deafness as a result of the pneumococcal bacterial meningitis. Plaintiff tried to contend that the child had cognitive problems which was disputed. Multiple defendants had experts, pediatric neurologists, who testified that the defendants met the standard of care in their care and treatment of the child, which resulted in a defense verdict.

Plaintiff v. Doctor. Medical malpractice. Plaintiff filed suit against the defendant (ob-gyn) represented by Mr. Roessler alleging negligent performance of a tubal ligation resulting in an unwanted pregnancy. Mr. Roessler presented expert testimony from a well known ob-gyn from a nationally-ranked medical school who testified that no matter how carefully a tubal ligation is performed, a certain percentage of cases will result in patency of the fallopian tubes and unwanted pregnancy. The jury returned a verdict in favor of Mr. Roessler’s client, the defendant ob-gyn.

Plaintiff v. Doctor. Medical Malpractice. Mr. Roessler’s client, a urologist, performed prostate surgery which resulted in a post-operative infection and sepsis causing plaintiff’s death. Expert testimony was presented that the urologist met all accepted medical standards and that the risk of infection existed no matter how carefully the prostate surgery was performed. The jury returned a verdict in favor of the doctor/defendant.

Plaintiff v. Surgeon. Medical malpractice. Mr. Roessler’s client, a general surgeon, performed hernia surgery on a patient who died of a heart attack during the surgery. Plaintiff contended that the surgeon should have had a cardiologist examine the patient before performing the surgery. Plaintiff had a history of high blood pressure but no history of heart disease. Mr. Roessler presented evidence that the plaintiff was examined by the anesthesiologist and that the surgeon had met the standard of care in the examination that he performed. This resulted in a defendant’s verdict for Mr. Roessler’s client.

Plaintiff v. Doctor. Medical malpractice. Plaintiff alleged that Mr. Roessler’s client, a general practitioner, failed to diagnose acute appendicitis and failed to refer plaintiff to a surgeon. Mr. Roessler was able to develop the facts from the surgeon that the appendix was not involved in the case and that the patient developed sepsis resulting in death. The jury returned a verdict in favor of defendant.

Plaintiff v. Doctor. Medical malpractice. Mr. Roessler’s client, an ob-gyn, performed a c-section resulting in a post-operative infection which led to her death. The defense expert witness testified that the patient developed thrombocytopenia to the extent that it was untreatable. There was testimony that the ob-gyn client met the accepted standard of care. This resulted in a verdict for Mr. Roessler’s client, the ob-gyn.